Zen in the Ice Rift: A Film Screening (5 Nov) and Panel Discussion (6 Nov)

How Matter Comes to Matter: New Materialism in Ecology and the Arts

The People I’ve Slept With: A Film Screening and Q&A

The Flavors and Feelings of China’s New Youth: Capitalist Soft Power and the Rise of a Global Technological Society

Global Sexualities Lecture: Weimar Berlin and the Birth of a Global Sexology

The Art of Film Festival Programming

Up Down & Sideways: Screening and Meeting with the Directors

Being There: The Importance of Networking 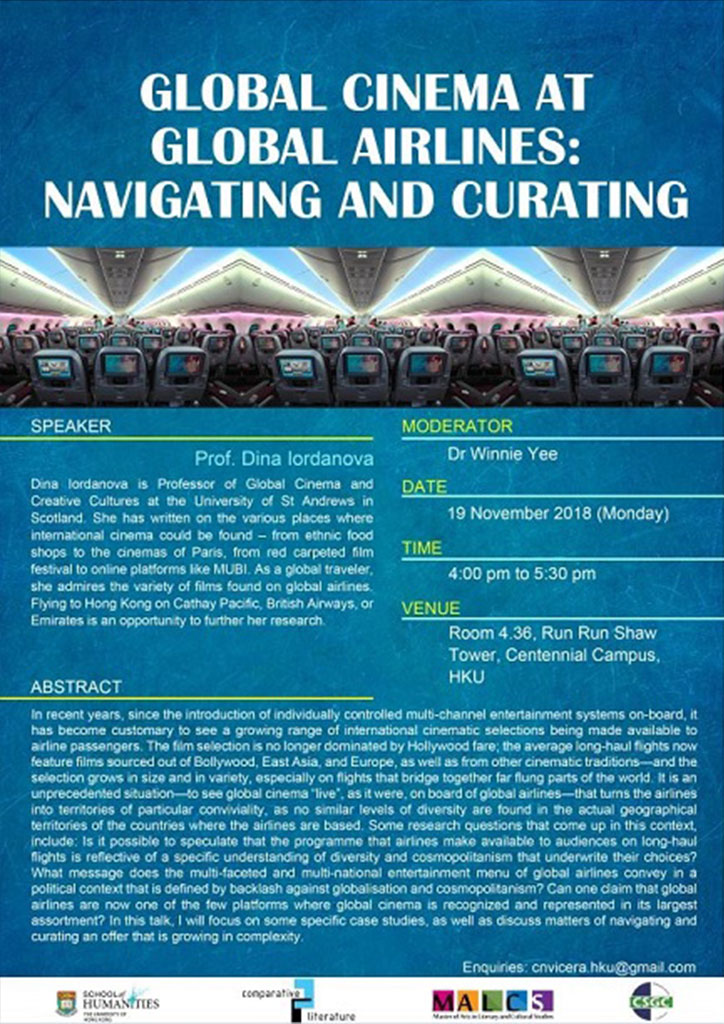 Action Films: A Supergenre from a Transnational and Comparative Perspective

Workshop on Publishing in the Arts and Humanities

Nostalgia and New Chinese Cinema in the 1980s 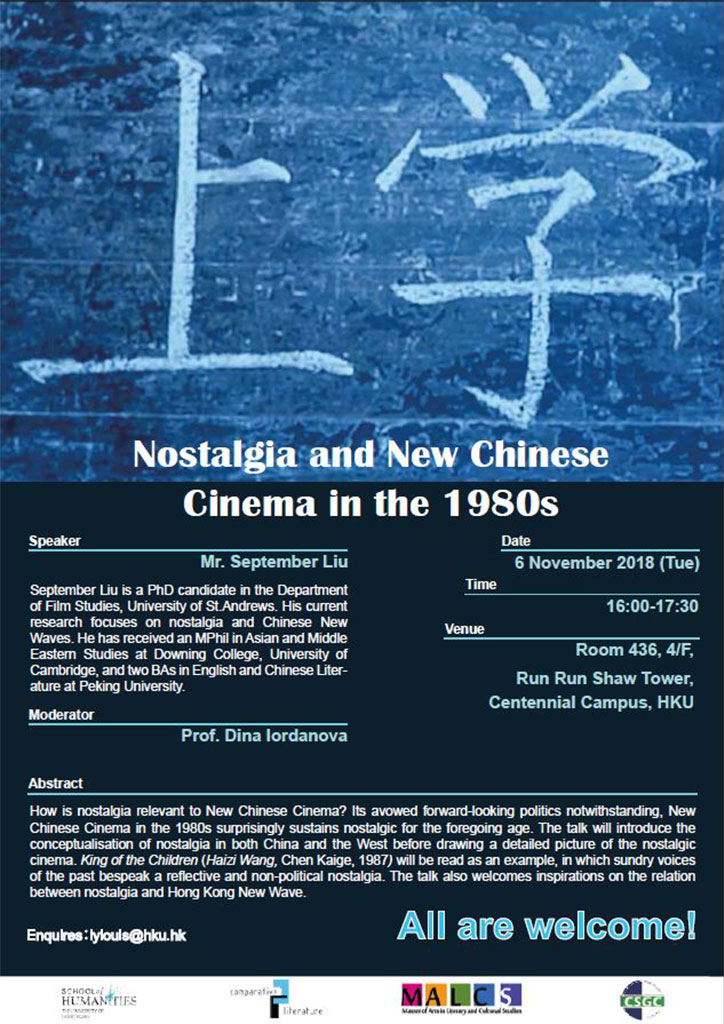 Paris as Hub for Global Cinema

Censorship and Self-Censorship in Hong Kong Today: What Can We Do?

Yellowing & City of Protest: a Conversation

Volatility in Finance, Culture, and Politics

Reflexive Experience of the City: Seeing Istanbul Through Hong Kong

May 27-28 2016
Contextualizing Asian Eco-Cinema: Past and Future
(sponsored by The China-West SRT in the Faculty of Arts, The University of Hong Kong)
Keynote: Prof. Scott Slovic (University of Idaho)
Moderator: Prof. Gray Kochhar-Lindgren (HKU)

Feb 12, 2014
From Photography to Music to Poetry – A Creative Farewell
(co-organized with the School of Humanities)
Speakers: Prof. David Clarke (Department of Fine Arts), Dr. Chan Hing-yan (Department of Music)

Oct 3, 2013
Making Films My Way In Conversation with Director Kang Je-gyu
(co-organized with the School of Modern Languages and Cultures (Korean Studies Programme) and the Consulate General of the Republic of Korea in Hong Kong)
Screening of My Way (2011) followed by a Q&A with the director
Moderator: Dr Aaron Han Joob Magnan-Park (Assistant Professor, Department of Comparative Literature, HKU)

May 15, 2012
Not “Chinese Montage” Exactly, but not Deleuze’s Either: Deleuze’s Cinema Books and the Recollection-image in Chinese Martial Arts Movies
Dr. David Martin-Jones (Film Studies, University of St Andrews, Scotland)

Nov 9, 2010
Screening of “Chubby Can Kill” (肥仔成龍), followed by a sharing session with the filmmakers
Kevin Ung (filmmaker) and Mona Chu (producer)

May 31, 2010
What is a Dispositif? Deleuze and Cinema
(co-organized with Department of Philosophy)
Prof. John Rajchman (Columbia University)

Feb 26, 2009
Thinking about Identity in a Global Context
Prof. Meaghan Morris (Lingnan U and U of Sydney)

Apr 15, 2009
The Crisis of the Humanities and the Redefinition of Hispanism
Prof. Eduardo Subirats (NYU)

China and Global Modernity Series
(co-sponsored with the Centre for East Asian Studies, Chinese University of Hong Kong, and the School of English and China-West Studies Research Theme Initiative, Faculty of Arts, HKU)

Globalization and Cultures Speaker Series 2008-09
(co-organized with the School of Humanities, HKU)

Mar 29, 2007
Brokeback: The Asian Side of the Mountain
Prof. Chris Berry (Goldsmiths College)

Apr 2, 2007
A Queer Feeling When I Look at You: Genre and Emotion in Stanley Kwan’s Lan Yu
Prof. Chris Berry (Goldsmiths College)